We have optimized the supply chain of machine guards - possible savings per project are in the 4-digit range
Curious? - Please feel free to contact us

As a manufacturer of machine guards, we have developed an extremely stable and solid design for demanding industrial environments with our ProSafe system. Our crash tests prove this impressively. Of course, we comply with all regulations and standards.

With our ProSafe machine guard system, we guarantee effective handling, light shielding and visibility protection. This ensures effective and safe production in the tough and demanding industrial environment. For us, machine safety means both operator safety and a safe production process.

On the one hand, the focus is on the physical integrity of people, as machine safety guards ensure minimum distances from elements with potential hazards, as regulated in the Machinery Directive 2006/42/EC. On the other hand, it is also important to secure the machine itself by means of protective fences and guards in order to ensure a long service life. 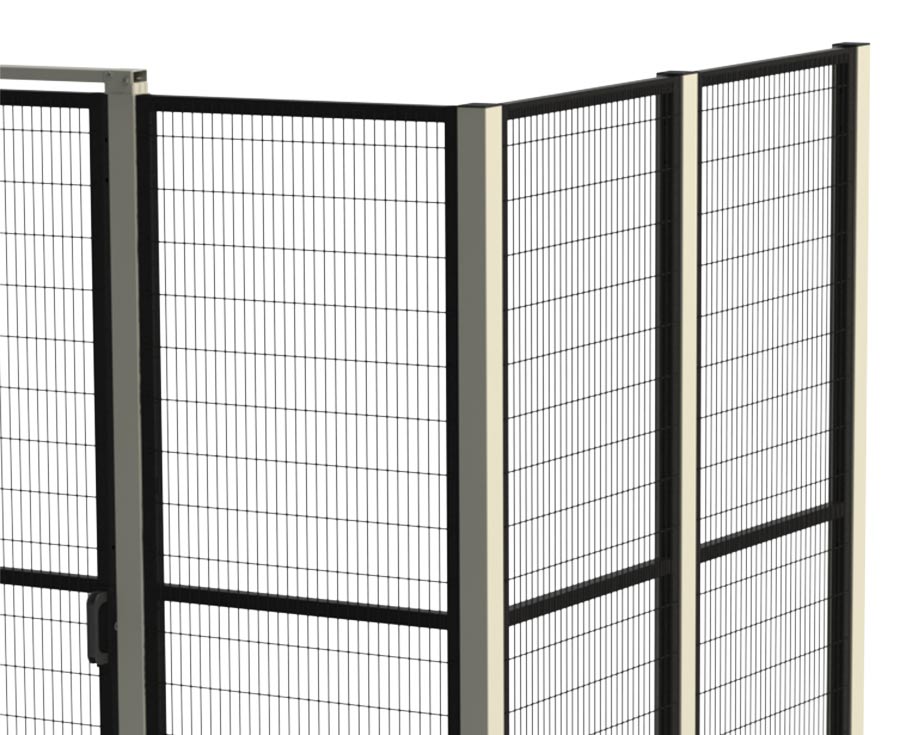 One of the most stable systems

The ProSafe machine safety guard has a 30 x 30 mm thick, stable square profile frame for maximum stability. A shortening set is available as a standard accessory, with which width and height can be easily adjusted during on-site installation. This provides very good flexibility in case of layout deviations on site.

Due to the 100 x 20 mm mesh size, the distance to the danger zone must be only 120 mm instead of 200 mm. Internal cross bracing prevents climbing up from the outside.
ProSafe thus meets the highest safety requirements.
You need a CAD file and a layout? We can also supply these to you.

Stability and variety of our machine guards

We manufacture high-quality protective grilles for industry. This also includes the 60 x 60 mm posts. These are available with both welded and height-adjustable foot (+/- 50 mm) in five different lengths.


Whether red, yellow, green or blue - our systems are powder-coated and available in all RAL colours on request.
You need a door or sliding door? Here, too, you use a ProSafe machine guard.
Ask for our configurator for a guide price.

Dimensions of the machine guards

Our extensive product portfolio allows us to create flexible and cost-effective partitions for your plants and machines. With many useful components, such as cable duct holders, shortening sets for flexible on-site adjustments, plates for closing floor clearances, you are able to respond to special customer requests. With the variety of our different door solutions, from swing and double doors, sliding doors, cantilever sliding doors and folding doors, we have the right solution for every application.

Our primary goal is to supply our customers with a machine safety guard that complies with standards and, of course, to install it if required. In addition, we focus on avoiding unnecessary follow-up costs of the protective grating projects. These services are confirmed by our customers.

Machine partitioning - with a wide range of applications

Machine partitions have a wide range of applications. They are used in projects in the field of automation, robot systems, presses and punching machines, as well as in the interlinking of processing machines. Machine partitions are also used in logistics and warehouse partitions. Here it is important that the fence systems meet the most diverse demands and requirements.

The flexibility of our machine protection grids also allows openings for conveyor technology, adjustments on site with our shortening sets as well as large fence heights of up to 5 m and more. This is where our robust and stable design of the mesh elements comes into its own. Furthermore, we offer our machine partitions in various designs. In addition to mesh panels, we also offer polycarbonate panels and sheet metal elements. Thus we fulfil the most different requirements of our customers. No matter if welding applications, splash protection or simply a beautiful optic with barrier-free view on the machines. All around a complete program for your requirements.

Machine guards and guards serve to prevent accidents by protecting the area of a machine against penetration by workers, against falling objects and against the ejection of loose parts. Certain standards apply here, such as the Machinery Directive 2006/42/EC and its supplement, the machinery standard EN349. The special design of the safety guards to protect the limbs of operators is defined in the machine standard DIN EN ISO 13857.

The safety guards are classified:


At the same time, there are certain requirements for machine safety guards or safety guard systems. They must fit the machine in terms of their dimensions and, if necessary, ensure easy access to it with the aid of doors. Their stability must be able to withstand the forces likely to be exerted by falling parts in the machine hall or the ejection of machine parts. Their nature and the distance from the machine must prevent accidental intrusion by the operator (DIN EN ISO 13857).

Compliance with the applicable standards and safety regulations is monitored by recognized expert organizations such as the TÜV. In German companies, a safety specialist must be appointed to monitor compliance with the standards. Protective grids in production plants are comprehensively planned. They have to withstand a wide range of accident scenarios.


Areas of application of machine safety guards
For effective accident and personal protection, machine guard grilles or guard grille systems are used wherever machines or vehicles move (warehouses, logistics) and/or cause hazards due to their own moving parts, even if they themselves are permanently mounted. In this context, the protective grids are often only one part of the overall safety concept, which also includes prohibition signs and, increasingly, light barriers. The latter cause an emergency shutdown of the machine if an operator approaches too closely. However, this measure does not protect against an accident caused by parts falling into the machine or parts being ejected from the machine. Therefore, machine guards or protective grating systems remain indispensable.

Their use is necessary in these places, among others:


Characteristics of the machine guards

The protective grilles are made of metal profiles, which enables their modular construction. In addition, they have doors with tamper-proof suspensions. They can be stationary or mobile. In their variants, they can be assembled and disassembled by a single worker. The mesh sizes can vary. A common size is 20 x 100 mm with 3.0 mm wire thickness. The standard paint should be jet black, but other colours are often used.
Our standard colour is RAL 9005 deep black, as recommended in the Machinery Directive.
Furthermore, we also have frame and frameless elements in our program.
A practical example would be the protective grille around a turbine in a power station.

During normal operation, the turbine rotates at 3,000 rpm, which generates very high forces. However, the danger is less during normal operation than during start-up after a general overhaul (or during initial commissioning), namely when running through the critical speeds (several ranges below 3,000 rpm). It's true that the turbine has a solid housing that no one can reach into, and that should also prevent turbine blades from being ejected. But if the turbine does not pass through a range of critical speeds quickly enough during startup, an imbalance occurs that can cause a turbine blade or wheel to come loose, ejecting the part with a force that even the housing could not withstand. In this case, the machine guard or equivalent would be the next barrier.
More information

Variety of applications for our machine guards - ProSafe